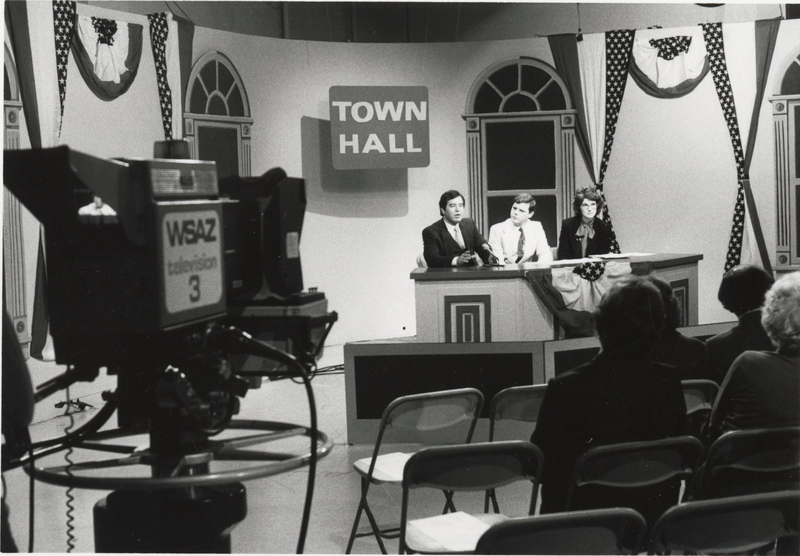 Congress serves as the voice of the people in the Federal Government. Members of Congress cast their votes on national issues while bearing in mind the needs of their constituents at home.

Members of Congress assist constituents who have problems with various federal programs and agencies, such as Social Security payments or veterans' pensions, and they hold events, such as town halls, to listen to constituents' concerns.

The First Amendment to the Constitution guarantees citizens the right "to petition the Government for a redress of grievances." Many people exercise this right by sending petitions, or letters, to Congress on a number of topics.

While the issues facing Congress today are numerous, complex, and often technical, many of the concerns voiced by Americans are rooted and mirrored in the past. In the 1960s, the Civil Rights Movement, gun control, immigration, and new social programs like Medicare, prompted many to write to Congress.

On January 4, 1965, President Lyndon Johnson called on Congress to eliminate the nation’s forty-year-old national origins quota system as the basis for immigration and pass an immigration law “based on the work a man can do and not where he was born or how he spells his name.” Administration-backed bills were introduced in the Senate and the House and led to significant debate. Congressman Arch Moore (R-WV) served on the House Judiciary Committee, which had jurisdiction over the bill, and he received input from Americans across the nation. The bill was signed into law in October 1965. 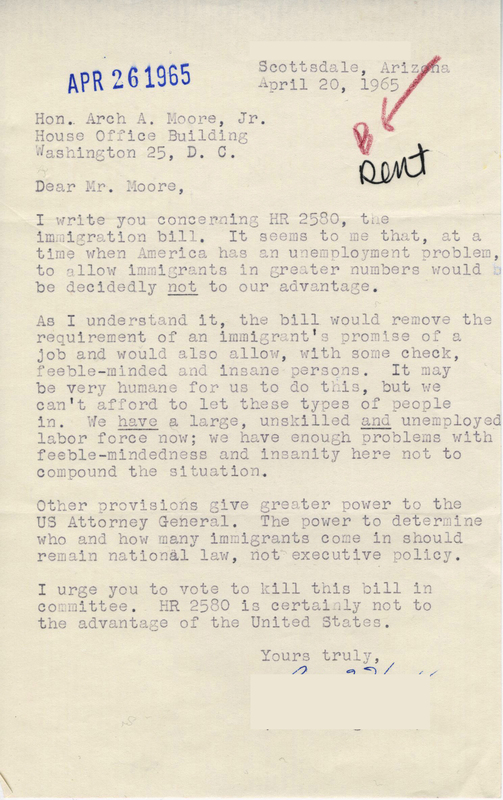 Letter from a Scottsdale, Arizona, resident to Congressman Moore 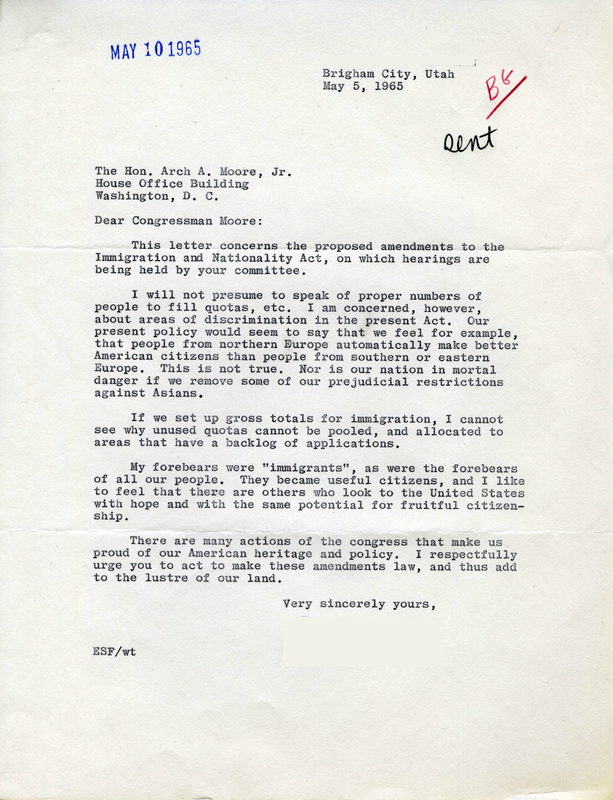 Letter from a Brigham City, Utah, resident to Congressman Moore

Early proposals for national health insurance during the Truman administration in the 1940s were unsuccessful, so in the early 1960s, members of Congress focused on extending health coverage to a smaller segment of the population: the elderly. As costs climbed, Americans over the age of 65 found it increasingly difficult to afford medical care and hospitalization. Despite strong opposition from the American Medical Association, Congress passed the Social Security Act Amendments, popularly known as Medicare, in July 1965. 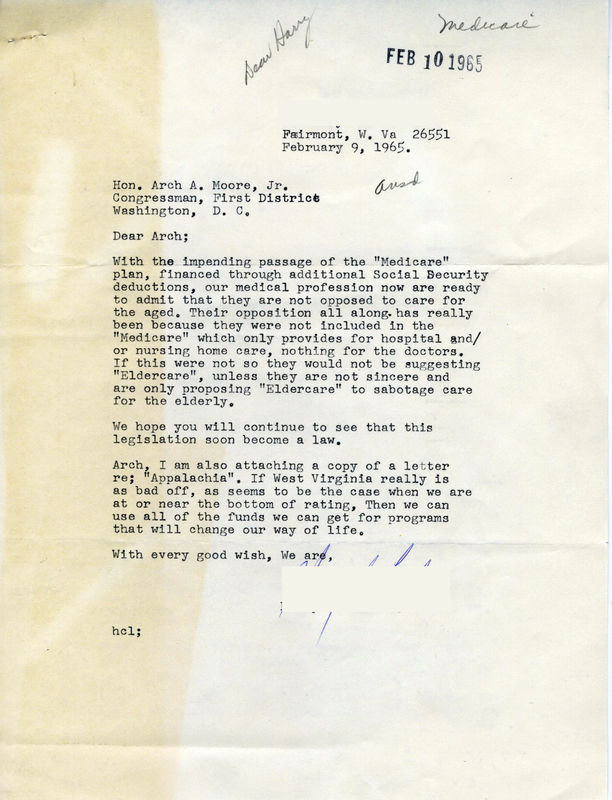 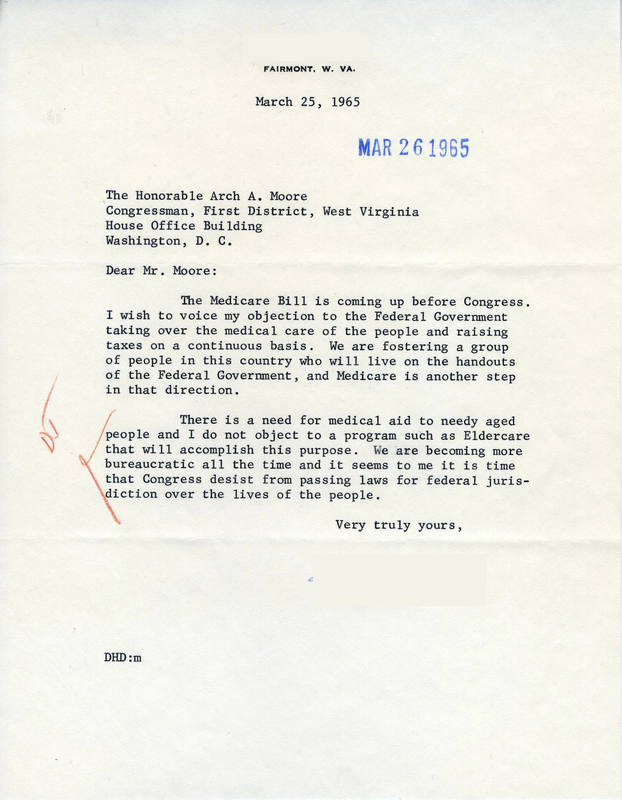 Following the assassinations of President John F. Kennedy in 1963, and Martin Luther King Jr. and Robert F. Kennedy in 1968, many Americans, members of Congress, and the President called for stricter gun control measures. Following an emotional and many-years long debate, Congress passed the Gun Control Act of 1968. With Congress’ constitutional authority to regulate interstate commerce, the measure prohibited interstate traffic in firearms and ammunition; prohibited gun purchases among certain individuals, such as convicted felons and the mentally ill; and introduced minimum age and serial number requirements. 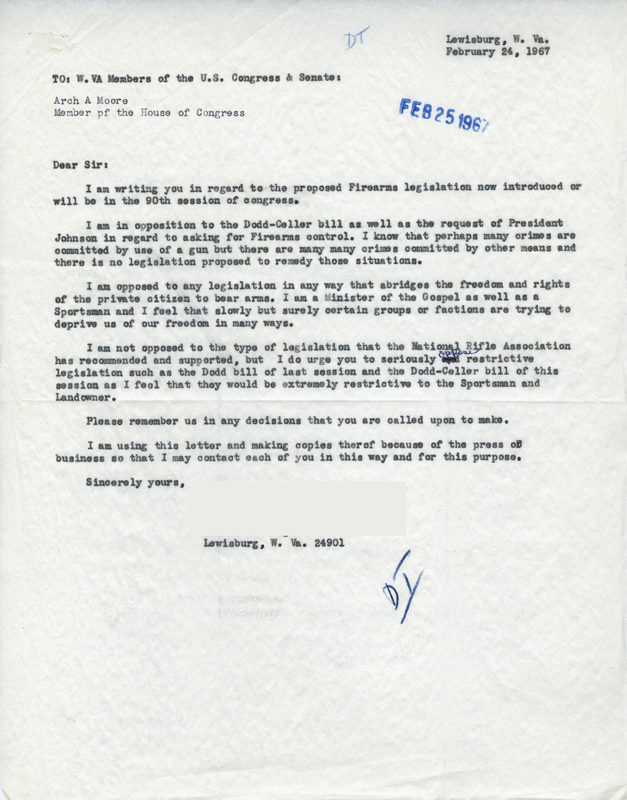 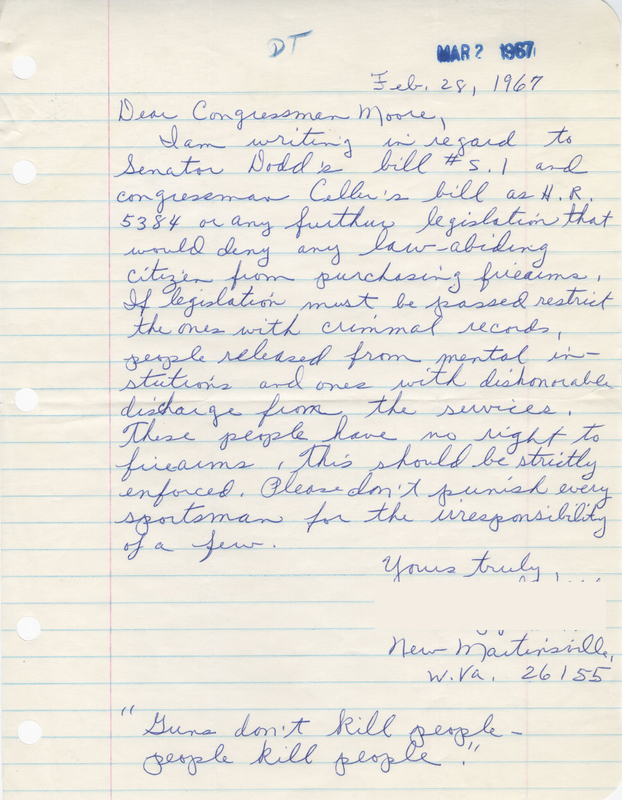 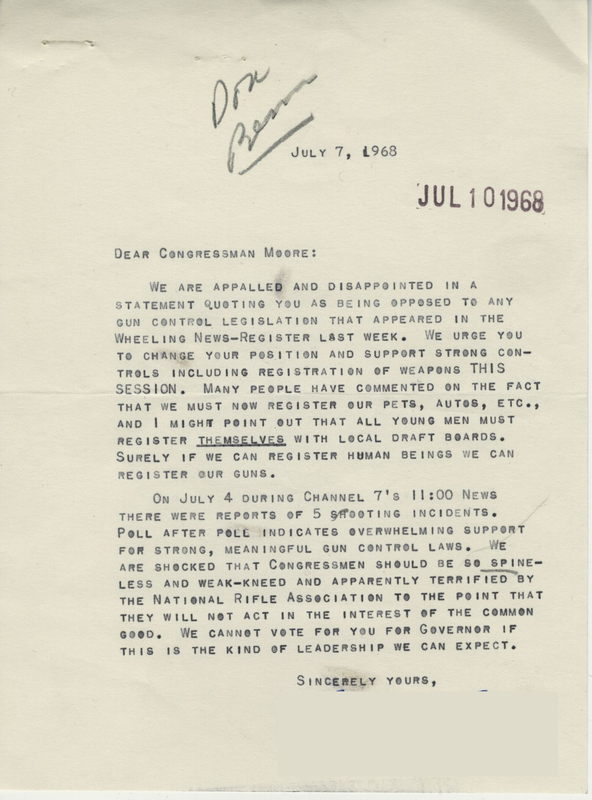 Each year from 1945 to 1956, Congress failed to pass a civil rights bill. It passed Civil Rights Acts in 1957 and 1960, but these produced only moderate gains. Civil rights activists became more active through sit-ins, boycotts, and Freedom Rides, and then in 1963 the Civil Rights Movement hit a turning point. That year saw the murders of civil rights workers, the March on Washington, and the deaths of four young girls in the bombing of Birmingham’s 16th Street Baptist Church. In June, President John F. Kennedy addressed the nation about his Civil Rights Act, and following his assassination in November, President Lyndon Johnson continued pressing for passage of the bill. The House of Representatives held nine days of debate and passed the bill in February 1964 after 70 days of public hearings that included 275 witnesses. In the Senate, opponents of the bill filibustered for 57 days, the longest in American history. After 83 days of debate, the Senate passed a compromise bill, which the House quickly approved. The Civil Rights Act of 1964 outlawed discrimination on the basis of race, color, religion, sex, or national origin; required equal access to public places and employment; and enforced desegregation of schools and the right to vote. 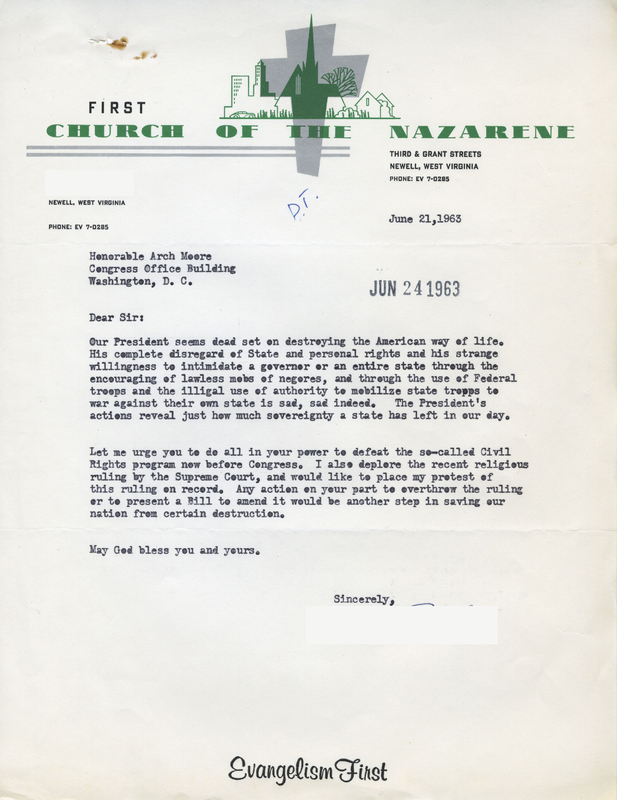 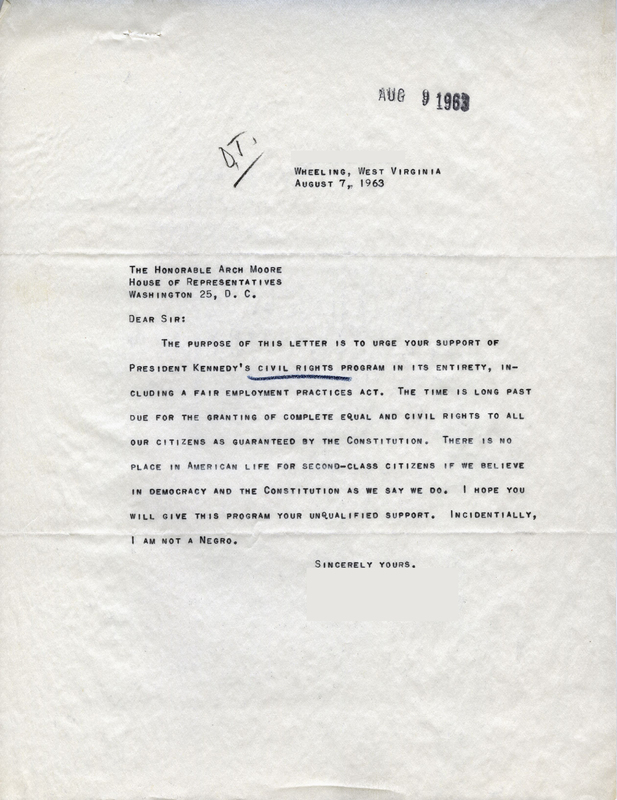 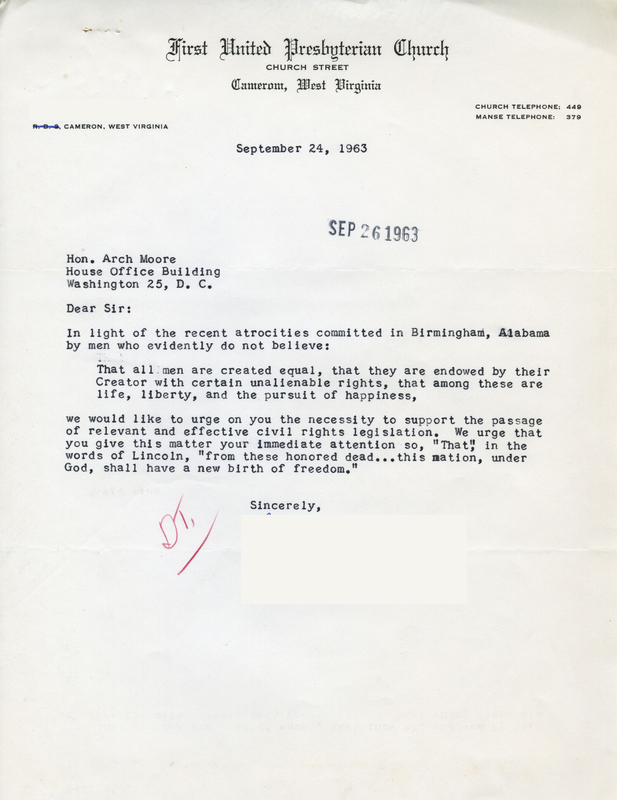 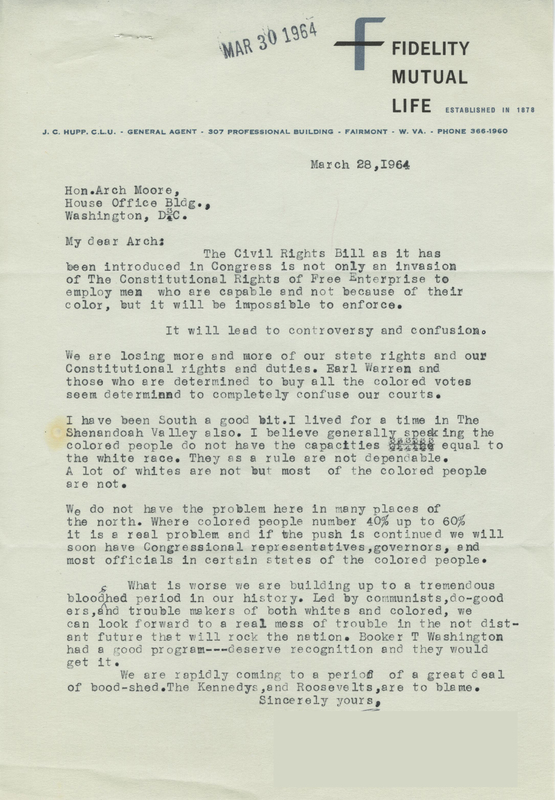