VRA Then and Now 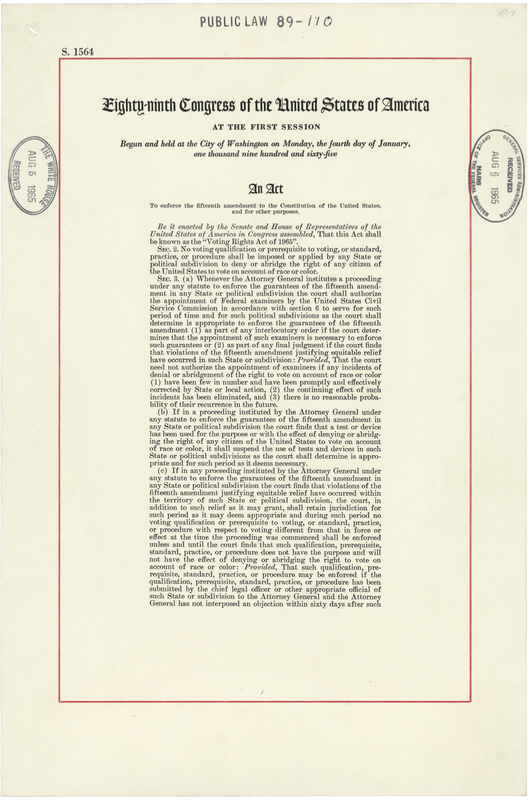 A conference committee was created to resolve differences between the House and Senate bills, and it removed the House poll tax ban. The House approved the Voting Rights Act on August 3, and the Senate did so on the following day. On August 6, President Lyndon Johnson signed the Act into law at the Capitol.

Ninety-five years after the Fifteenth Amendment was ratified, the Voting Rights Act of 1965 significantly changed the relationship between the Federal and state governments. It outlawed literacy tests and provided for the appointment of federal examiners, who could register qualified voters, in certain jurisdictions with a history of voting discrimination. Additionally, jurisdictions with a history of voting discrimination could only change voting practices with “preclearance” from either the District Court for the District of Columbia or the U.S. Attorney General.

The Voting Rights Act was tremendously successful. The disparity between white and black voting registration rates dropped from nearly 30 percentage points in the early 1960s to just 8 percentage points a decade later.

Congress has reauthorized the Act multiple times, most recently in 2006.  In 2013, however, the Supreme Court overturned a key provision of the Voting Rights Act. In Shelby County v. Holder, the Court invalidated the “coverage formula,” which determined the states and localities required to seek preclearance for changes in voting rules that could affect minorities. Following the ruling, several states began implementing photo ID laws.